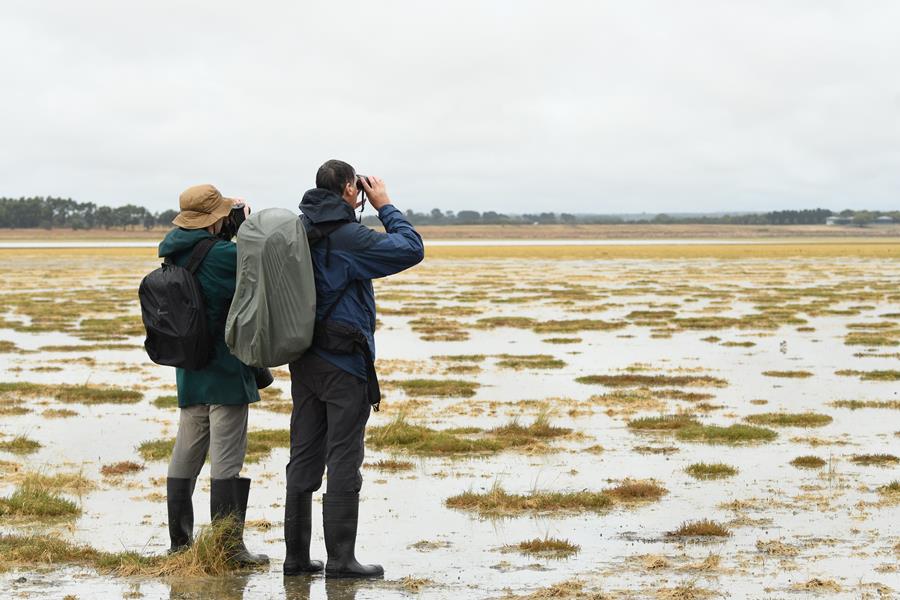 Having destroyed more than half of the Earth’s wetlands in just 100 years; humans are clearly very good at erasing them, but how do we fare at building them?

Constructed wetlands rarely seem to host wildlife quite like natural ones and depending on the context, several explanations could be given for this. From my observations of wetlands and wildlife, there seems to be a major recurring drawback associated with almost every constructed wetland I’ve ever examined. But, rather than being an ecological inevitability, this drawback is simply the result of unconscious bias in the design. Although frustrating to see repeated over and over, this is good news because it means that all we need to create more rich, varied and dynamic wetland habitats is a bit of consideration.

Birds are great environmental indicators thanks to the diversity of niches that they collectively fill and their supreme mobility. Water-birds are especially mobile; meaning that if a wetland is missing a suite of birds, it is probably not because they are yet to reach it but because it is not meeting their requirements. The 8th of December 2012 presented a powerful message to this effect. The Elsternwick Park Lake was in the process of being drained to remove European Carp and Red-eared Sliders. The resulting shift in habitat-availability almost immediately manifested in a shift in the ecological community. The lake was transitioning from a deep and steep-walled impoundment to a warm, silty soup and overnight its historical bird-list suddenly jumped up by three new species. Five Red-kneed Dotterel, two Pink-eared Ducks, and a White-necked Heron! All species which had never used the lake before, and yet here they were all of a sudden, putting on a show, which Neil Blake came and joined me to admire. Over the next few days, they were joined by four Australian White Ibis, a Rufous Songlark and an Australian Pelican – also new birds for the lake.

Why would more birds appear as the lake shrinks? Over years, sediment had been accumulating in the bottom half of the lake, making the bed perfectly flat and when the water dropped to meet this level, it burst into life. With a higher biodiversity and productivity than either the land or the water, the wet land in between is of critical importance. Considering this, it is perhaps not surprising that 62% of Victoria’s waterbirds do not have webbed or lobed feet for swimming but tend to walk along the edges or through shallow water only. Their muddy zone, which I’d define roughly as ranging from exposed soil with a wet sheen down to water as deep as 5cm, is almost always neglected by wetland-designers. It seems that the human mental image of a ‘good’ wetland accentuates deep water, static water-level and tree-cover right up to the edge. This severely limited habitat-spectrum is made worse by its repetition throughout the landscape, hosting the same select few organisms and excluding the rest again and again. The Elsternwick Park Lake example shows that while habitat-diversity is so desperately needed, we so rarely offer it.

– This thin film of water covering hectares of lake Modewarre represents the opposite extreme to the typical constructed wetland. It hardly even necessitates gumboots but is famous for drawing rare waterbirds and by extension, birdwatchers.

To put it simply, the all-important missing element in constructed wetlands is mud and there are two main features (one design and one management) that can expose mud in a wetland.

Our current wetland is both steep and static so when a Latham’s Snipe appeared in the Elsternwick Park Nature Reserve earlier this Spring it was a great surprise. The bird had flown all the way from Japan (where they breed) and remarkably, had found perhaps the only 2 square metres of exposed gentle gradient in the whole of our wetland. A dense mat of especially low aquatic plants had extended out over deep water to create a platform, where the snipe could probe for worms. The tenacity of this snipe surely must inspire us to make the most of this great opportunity to help wildlife. If two square metres of good habitat drew in and fed one Latham’s Snipe, what might be achieved with several hectares of carefully designed wetlands? If eighteen or more Latham’s Snipe occur in one place, it is then considered to be a site of national conservation significance. What a brilliant example it would be if we are able to create such a site from scratch in an urban park like ours.

I have visited many important snipe-sites with the intention of analysing the habitat and found the above juxtaposition to be quite telling. The reserve on the right is a classic construction, even containing a few well-intentioned islands but it is ultimately a distorted product of human-bias; hostile to the snipe. The adjacent reserve on the left however, is a natural remnant and is widely considered to be the most important site for the species anywhere outside of Japan; hosting up to 430 snipe at once. This amazing little wetland in Port Fairy reminds us that we must consult closely with nature to succeed in restoring it.

Note: Incidentally, when Elsternwick Park Lake refilled, the resurgence of deep-water birds was also fantastic. The removal of Carp from the system reduced water-turbidity; allowing meadows of Potamogeton crispus (Curly Pondweed) to form on the sunlit lakebed. Hoary-headed Grebes and Hardheads nested for the first time thanks to the flourishing Glass Shrimp population. The following flood in December 2016 (pictured below) brought Carp back down the catchment and into the lake causing conditions to quickly deteriorate once more. I recommend a biennial or triennial drying regime for the health of this lake.